Reviewed by Tracy A. Fischer for Readers’ Favorite
Wow! When you pick up Mindy S. Halleck’s debut novel, Return to Sender,
be sure you have enough time to devote to it, because you won’t want to
put it down! A gorgeous read featuring our protagonist, Theo Riley, a
Catholic priest wrestling with demons from his past as his life spirals to a
very dark place. Drinking too much, dealing with his guilt over the
outcomes of the Korean orphans he encountered during the war, haunted
by the legacy of a dark family secret, and grieving the loss of his true
love, Andréa, he struggles with his duties as a prison minister. When a
sweet little girl arrives on his doorstep, love returns to his life, and a serial
killer madman arrives, putting all he loves at risk. Theo must make
decisions that could lead to his redemption or to his ultimate demise.
Return to Sender was what I would truly bill as an epic read. Touching on
issues of wartime trauma, PTSD, spirituality and religion, and grief and
redemption, this wonderful book has something for everyone. It’s hard to
believe that it was written by a new novelist as its breadth and scope are
so wide and vast. Mindy S. Halleck’s writing style is emotionally driven,
complex and intriguing. Return to Sender would appeal to any reader who
enjoys an exciting, emotion-filled tale. Her book will keep you on the edge
of your seat, rooting for our hero, Theo, and hopeful for the best for all
the characters that you come to love. I will be eagerly waiting for the
next work from this promising author. 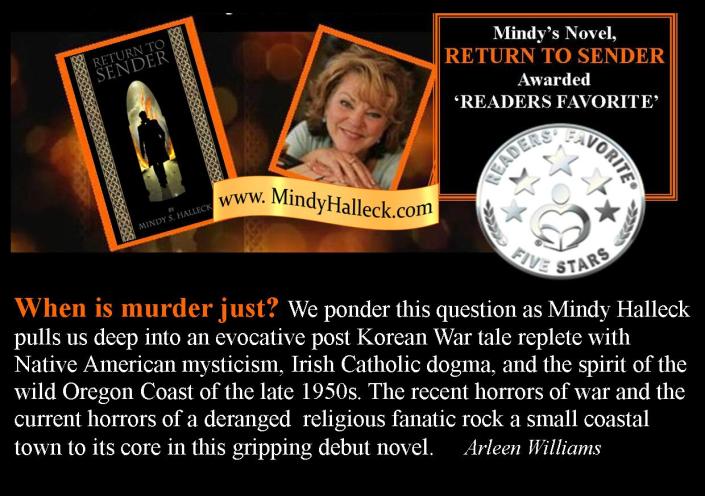 Another great review of Return To Sender

Mindy’s writing style was impeccable and quite expressive. I found myself easily slipping into her vision of the 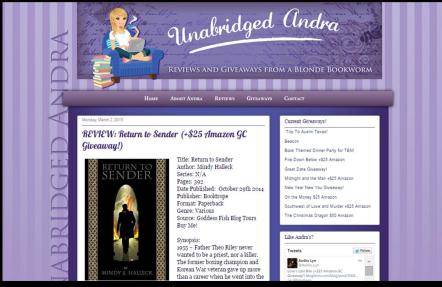 world in the 1950’s and succumbing to the darkness and mystery found within! This is a psychological thriller and seems to write the book on tortured heroes with traumatic pasts.

The story revolves around Theo, a priest/war veteran/former boxer who is returning home after the Korean war all torn up inside and broken because of the war and losing the love of his life. Blending in almost Native American-esk kinds of spirituality, Theo strives to take similarly broken souls and heal them. He finds comfort in the bottom of a bottle, but his journey towards the priesthood transforms and heals him along the way.

I enjoyed the multiple points of view. It’s great to get a good hero that you can fit inside his head, but it’s even greater when you find a villain that either chills you to the bone or lets you feel out some of the reasons that they are so twisted. Getting glimpses from both sides of the fence helped to build a bigger, more condensed picture of events that was very enjoyable!